RESOLVENewsDNS Changer MUST be Resolved!

Russian Wikipedia Shuts Down in Protest of 'Censorship' bill 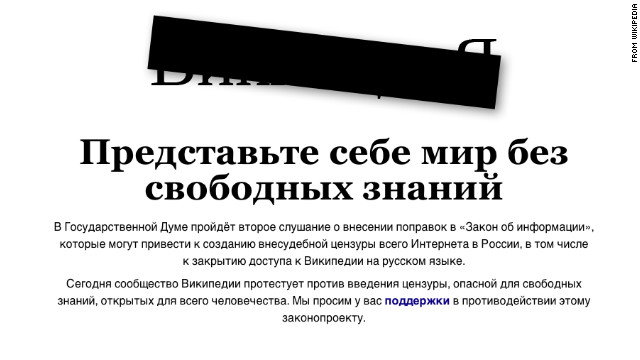 The Russian version of Wikipedia shut down Tuesday in protest of a "censorship" bill. The free encyclopedia on Tuesday temporarily shut down access to most of its Russian-language site in protest of proposed legal action in Russia that it says would result in Internet censorship. Visitors to ru.wikipedia.orgon Tuesday saw a black censorship bar over the Wikipedia logo and a message asking them to imagine a world without free access to knowledge. In January, Wikipedia shut down its English sites for 24 hours in protest of anti-piracy laws that were being discussed in the U.S. Congress.

That action was cited as evidence of a new wave of political power for the technology and Internet industries. Google and others joined in that protest, which essentially derailed two anti-piracy bills in the United States. The Russian Wikipedia site compares proposed amendments to an "On Information" law to China's hyper-restrictive firewall. If implemented, the changes to the law could result in access to Wikipedia being cut off permanently, the group says. The bills, according to news reports, would allow the government to blacklist certain websites. The aim, the government says, is to protect Internet users from harmful content like child pornography and websites that promote substance abuse. The updates do not have universal support in the Russian government, the news site says. The country's information minister, for example, has "voiced doubt" about the changes, saying they would be difficult to enforce.

We have 596 guests and no members online