Windows Defender Gets Upgraded As Windows 10 Aims To Improve 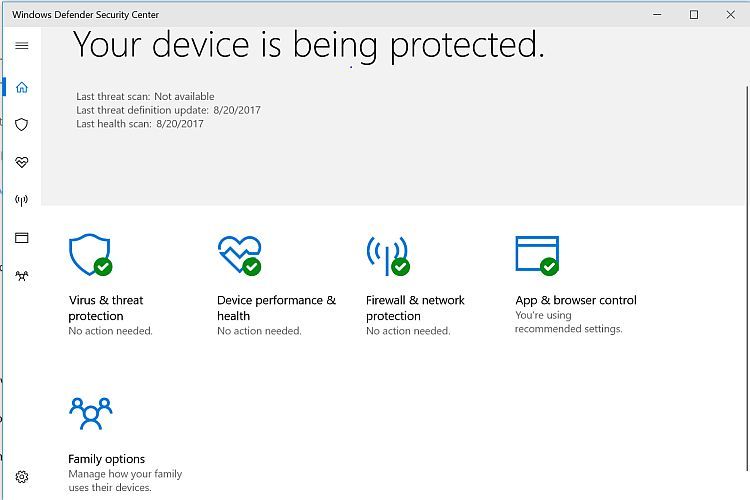 Windows Defender was historically a simple yet generally (fairly) effective security tool Microsoft provided as a built in antivirus solution for its Operating Systems. As Windows 10 continues to evolve one thing Microsoft has decided to change is the way Windows Defender protects the computing environment by adding more functionality along the lines of what other antivirus solutions have typically included. What Microsoft is now calling the Windows Defender Security Center includes Virus and threat protection as well as Firewall and network protection but will defer those functions if you have a viable solution already installed. The image above is from a machine with no other antivirus solution installed whereas below we show how it looks when Norton Security is installed. The Windows Defender Security Center also has Device & performance health monitoring which keeps an eye on your device driver status along with storage capacity and Windows Update status. Also included are App & browser control and Family options - think Parental Control. All of these things come together to demonstrate that Windows Defender gets upgraded as Windows 10 aims to improve. 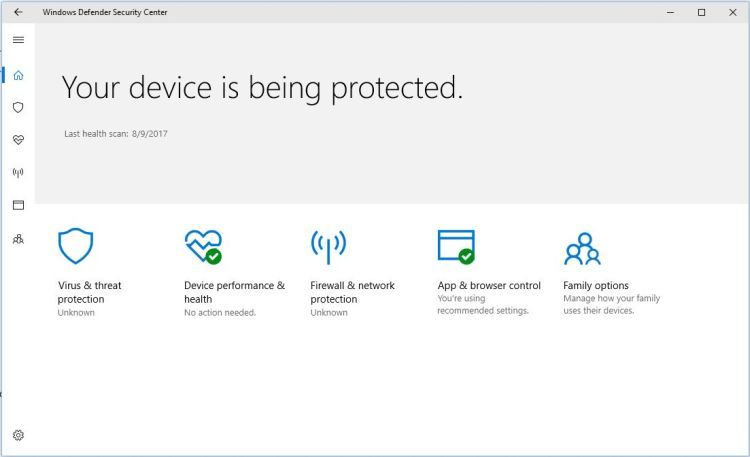 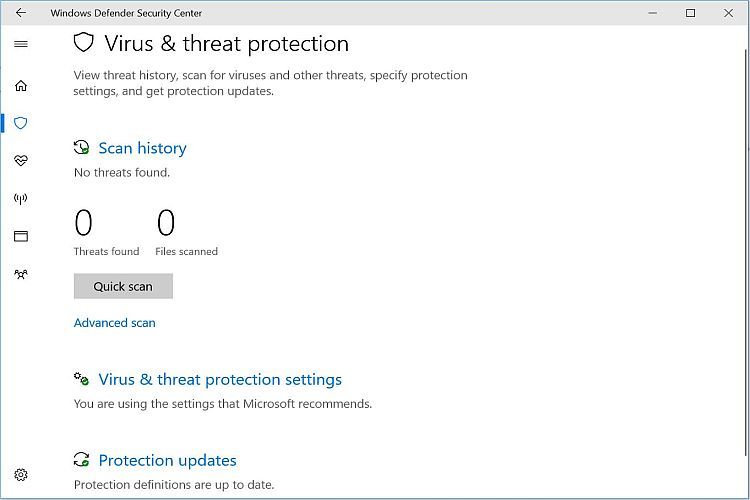 The Windows Defender Security Center is showing relatively serious progress in attempting to cover many facets of the computing environment's overall security concerns but how well it detects and removes viruses and malware remains to be seen. Notice from the image above this computer uses Symantec's Norton Security until further notice, but if you have no other solution at least you do have the Windows Defender Security Center. There will no doubt be many people in the industry studying its effectiveness as a built-in antivirus solution within Windows 10 and reports are sure to follow in short order. Computer virus infections and malware infections are becoming far more threatening today than ever before and Microsoft would do well to ensure that those threats are fully dealt with using the Windows Defender Security Center.

The first image below shows Windows Defender with its Firewall enabled and the second shows how Windows Defender defers to Norton Security. Note that even when enabled Firewall Advanced Settings do not function in Windows 10 version 15703 and you would need to use the Control Panel. 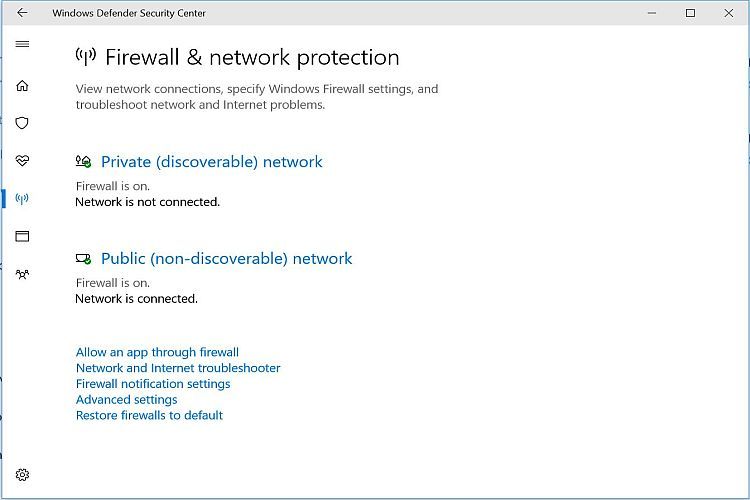 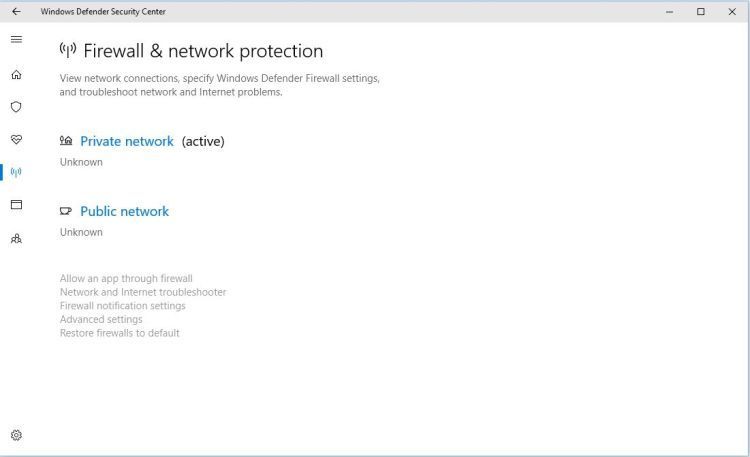 Regarding other security threats the new Windows Defender Security Center also boasts protection with the Windows Defender Firewall. Microsoft has basically relocated the Windows Firewall and all of its settings and controls to within the Windows Defender Security Center. It is here where you can set Public and Private network settings, allow or disallow Apps through the firewall and set them to be private or public access.You can also add an App and adjust its settings to allow it through your firewall. There is a link to the Network and Internet troubleshooter located in the Windows Defender Firewall and network protection area of the Windows Defender Security Center in case you have any connectivity issues that arise. Firewall notification settings can be set to ON or OFF according to whether or not you wish to be notified when your Firewall blocks an App and you can set to be notified regarding Virus scan results. Firewall Advanced Settings do not function in Windows 10 version 15703 and you actually need to go to the Control Panel to access them, with that link being non-functional in the Firewall and network protection settings. Microsoft has been notified by Resolve and is taking action to resolve that issue. Naturally you can also restore firewalls to default settings by tapping or clicking the link. 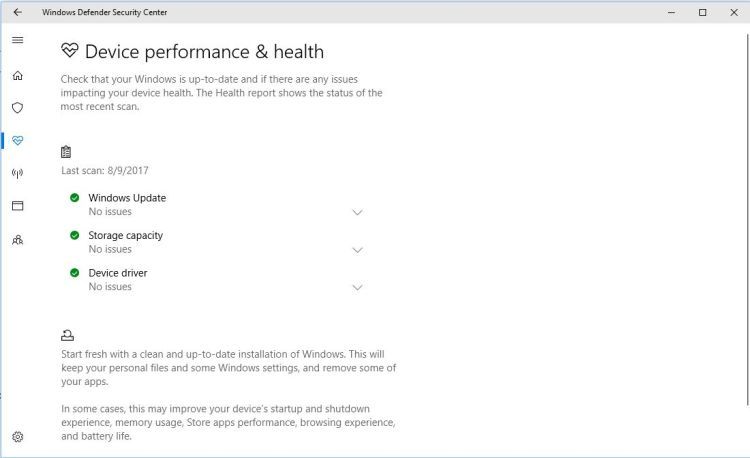 This new aspect of the Windows Defender Security Center is pretty interesting and many may find it helpful. Windows 10 monitors whether or not Windows Update is up to date and if there are any problems with updating. It is uncertain at this time how things might be resolved if there were an issue but it is being monitored. Storage capacity is something many people don't necessarily think about often enough and many people load up their hard drives with tons of photos and of course videos which can eat up available storage capacity. When too much capacity is used it can definitely cause problems and slow your system down, even dramatically. With the Windows Defender device performance and health running regular system scans you can be alerted to the possibility of impending problems. The other thing which is also important is the status of device drivers in the system. These often need to be updated and the idea here is to detect if drivers need to be updated and alert you if that is the case. 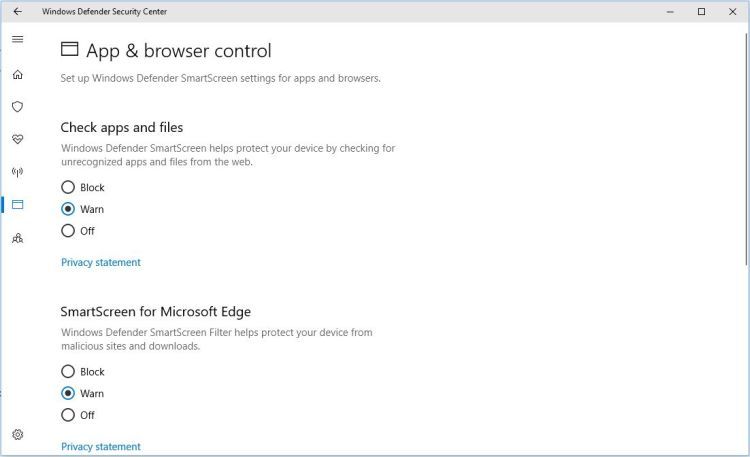 This is all about the Windows Defender Smart Screen and how it can monitor and protect several aspects of your computing environment. Not only does it monitor apps and files from the web and through Edge it checks content which might be used by the Windows Store App. Each smart screen setting other than the Windows Store App monitoring can be set to block or warn by default and they can even be disabled. Not entirely certain why store app content can't be blocked but that is how it's set up. There is a link to the privacy statement from Microsoft along with each of those three settings but each links to the exact same URL so it is a bit redundant. The other item listed in the Windows Defender app and browser settings is Exploit protection. You would see this as well as the store app setting by scrolling down within that window. This is something you probably don't want to go in and change (i.e. Data Execution Prevention and others there should be left ON) but the options are there to at least observe. 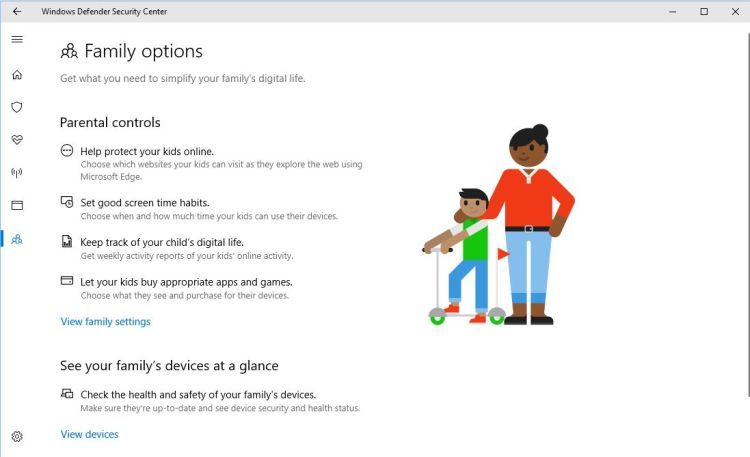 Here you have the Windows 10 equivalent of Parental Controls, which includes parental device controls. First thing to note here when you scroll down is Microsoft's indication at the bottom of that screen that "Not all features are available in all markets". You will see as well that the information in the Windows Defender family options is just that - information but not actual controls or settings. In order to use these functions you are led online to sign in to your Microsoft account and add a family member and/or add devices which may not already be associated with that account. In browsing through the site linked to to View family settings it is further mentioned that certain functionalities vary not only by market but also by device type. Much like Windows 10 itself, this is a work in progress.